So, I’ve been sitting on a little something for a while now.

If not, check it out over here at Revolt Daily.

So anyway, an old college friend of mine, Rob Neilson, reached out and asked me if I’d be okay with him making the story into a short film under his Savage Henry Films banner.

If it was anyone else, I think I would have said ‘No’. Not to blow smoke up Rob’s ass, but I always had a lot of respect for his devotion to film and his taste in movies. Seriously, he introduced me to a lot of the films that shaped (warped) me and he and I always had an extremely similar palate when it came to horror and terrible Hong Kong flicks.

So I said yes.

Now, I’ve been CRAZY quiet about this on social media. Chalk that up to a mix of superstition and a little fear of trumpeting off like an egotistical asshole, but since things are happening and I will probably have a LOT to share with folks regarding other projects soon, I figure, hey, let’s go for broke.

Here he is at the start.

A lot of fantastic work was put into Bill by Facades FX Studio and I am floored by the final result. 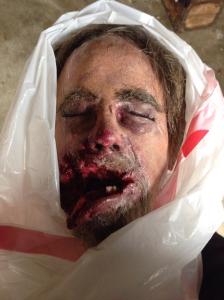 Thanks so much to Rob, Facades FX, Revolt Daily, and Renee Pickup for making Tourists come to life in print and film! I’m incredibly grateful to have some amazing people who not only consider my writing worth a first look, but enjoy it enough to share it this way.

“Tourists” stars Houston’s own Joe Grisaffi as well as veteran theater & films actor (and one-time Steve McQueen’s roommate) Guil Fisher, who Rob has worked with in several films in the past.