How the hell is it September?

*gets a thorough explanation on the movement of space/time and human use of defined measurement of said passage of time based on the rotation of the earth and its own rotation around the sun.*

Got a few cool things coming down the pike and I figure I hold off ACTUAL writing to pretend I’m writing here.

Whatever, not like I have any active deadlines *pokes email inbox*

First and foremost, BOUCHERCON, YO. Excited to see my Crime fic family and get to participate in my first panel. Said panel is a fucking corker check it:

All respect to Mr. Crimespree himself, Jon Jordan, for putting this pic together.

Seriously, these are all fantastic folks (and writers!) I’ve interacted with quite often. To say I’m humbled and excited is putting it lightly. I have a feeling we’re going to put on a fun show and have a wonderful chat.

If you can’t catch me then, I’ll be out and about from Thursday afternoon to Sunday morning. You’ll more than likely find me at the hotel bar like a proper writer. There’s also a good chance I’ll be drunk, but bright side: I am friendly drunk and rarely vomit, so we got that working for all of us.

Speaking of that Thursday night at Bouchercon, be sure to come on down to Cosimo’s in the French Quarter for the 5th Anniversary celebration of Down & Out Books! Very cool reading lineup:

You’d be remiss to not join in on what’s going to be a very fun time with excellent writers and wonderful readers hanging around being fucking GLAMOROUS as all get out.

I’ve got a piece based on The Replacements’ song, Kiss Me On The Bus coming in an absolutely amazeballs anthology coming from Gutter Books this October, Waiting To Be Forgotten. Much love to Jay Stringer for herding cats and making mountains move to get this together. I’m really proud of this piece and hope folks like it. Otherwise, take great joy in Johnny Shaw’s, Gary’s Got A Boner – it’s amazing. 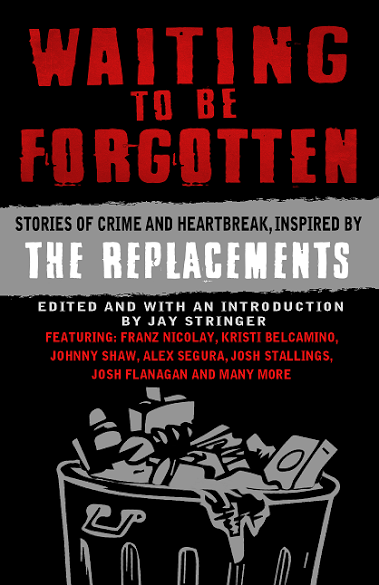 Later this year? Down & Out Books releases my next novella, No Happy Endings. Here’s a little description:

Fantine Park is not the woman her mother was—she’s certainly not the safecracker her mother was either. Hell, she’s not much of anything useful these days. Fresh off her parole term after doing a stint in prison for a poorly thought out casino robbery, Fantine finds herself confronted by an old partner of her mother’s and right back in the thick of it.

Unfortunately, the man dragging her back to the life she left behind, one Aleksei Uryvich, is a complete bully and an idiot—content to believe he can get anything he wants with his brutish nature and the threat of a bullet for Fan’s elderly father, Jae.

The score: semen. Yes, semen. Gallons of it. Particularly, the genetic man-batter from supposed Ivy Leaguers and other elite. The material nets top dollar from Asia and Aleksei is foaming at the mouth at the profit potential.

The plan: there is no plan. Fantine has to get it out of Evensight Storage; a sperm bank situated right by the Battery Park Tunnel in Manhattan. A place barely anyone but a sad sack with an empty sack sees the inside of on a day to day basis.

Fortunately, there’s a storm coming; a potential distraction going by the name of Superstorm Sandy.

That’s not even the kicker. There’s more going on at Evensight than anyone knows. There’s no guarantee anyone involved in this mess is getting out alive, especially when Fantine finds herself face to face with the psychopath known as O Leiteiro—The Milkman—and the massive conspiracy that lies beneath the streets of New York City.

I’ve got a cover for you soon. Love it. Also love Down & Out. Hell, love them so much, they’re releasing my short story anthology, Meat City on Fire and Other Debacles, next year! More on that soon!

In the meantime, the next part of what I’ve deemed A Song of Piss & Vinegar, Blacky Jaguar Against The Cool Clux Cult!!!, is being beta read and is well into its sixth revision. This was a tough nut to crack for many reasons I may talk about closer to release. Needless to say, it’s some of what folks expect after reading The Fury of Blacky Jaguar, but heavily inspired by Walking Tall, Billy Jack, and recent events involving Black Lives Matter and the toxic underbelly of the internet.

Like I said, tough. Hopefully, not many people get pissed off.

That about does it for now. Check out my stories tab above if you’re interested in reading what I have out now. Lot of fun pieces floating around out there.